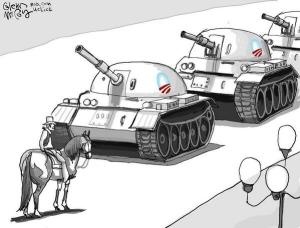 There seems to be much confusion to what exactly the United States is, and more importantly, what it is not.

It is 2015 and the political landscape is heated. Events like the Bundy Ranch Standoff have brought people into a clear taking of sides. Is the Federal Government in the right, or is it possibly the Bundy supporters? To understand this complex issue, we must understand our form of government. There seems to be much confusion to what exactly the United States is, and more importantly, what it is not. How does this relate to the standoff at Bundy Ranch you might ask. Well, to understand who is right, we must revisit our Independence.

A BRIEF HISTORY OF THE FEDERAL GOVERNMENT
On July 2, 1776, the several former colonies of the British empire voted to declare their independence from British rule. It was officially declared two days later with the final document, the Declaration of Independence. These colonies after the Revolutionary War became individually sovereign and independent states recognized by King George III. Shortly thereafter, the Articles of Confederation were put into place to unite the fledgling nations into a confederacy for their mutual safety. Then, during the bitter winter of 1786-87, Daniel Shays, a modest farmer and Revolutionary War veteran, led an unsuccessful armed rebellion against the state of Massachusetts. Their desperate struggle was fueled by the injustice of a regressive tax system and a conservative state government that seemed no better than British colonial rule. This is one of the major events that lead to the Constitutional Convention and the Constitution for the United States of America.

The Federalist (Papers) is a collection of 85 articles and essays written by Alexander Hamilton, James Madison, and John Jay promoting the ratification of the United States Constitution. James Madison states in The Federalist #39:

[T]he new Constitution will, if established, be a federal and not a national constitution… The idea of a national government involves in it, not only an authority over the individual citizens, but an infinite supremacy over all persons and things, so far as they are objects of lawful government. Among a people consolidated into one nation, this supremacy is completely vested in a national legislature… the proposed government cannot be deemed a national one; since its jurisdiction extends to certain enumerated objects only, and leaves to the several States a residuary and inviolable sovereignty over all other objects…

Madison continues in The Federalist #40:

Each State in ratifying the Constitution is considered as a sovereign body, independent of all others, and only to be bound by Its own voluntary act. In this relation, the new Constitution will be a federal and not a national Constitution.

It was understood that the new Federal Constitution had no national character, but merely encompassed what is known as private international law.(1) The Federal Constitution itself is a private international law compact between several sovereign nations. Our Union is similar to the European version, minus one BIG difference which I will address soon.(2)

So where did the Founders get the idea of a federal government from? Emer de Vattel was a Swiss philosopher, diplomat, and legal expert whose theories laid the foundation of modern international law and political philosophy. He describes a “federal republic” in his authoritative work, Law of Nations, Book I, § 10 Of states forming a federal republic:

Finally, several sovereign and independent states may unite themselves together by a perpetual confederacy, without ceasing to be, each individually, a perfect state. They will together constitute a federal republic: their joint deliberations will not impair the sovereignty of each member, though they may, in certain respects, put some restraint on the exercise of it, in virtue of voluntary engagements. A person does not cease to be free and independent, when he is obliged to fulfil engagements which he has voluntarily contracted.

In Article IV, Section 4 of Federal Constitution, the definition of the United States can be found in its original meaning:

The United States shall guarantee to every State in this Union a Republican Form of Government, and shall protect each of them against Invasion; and on Application of the Legislature, or of the Executive (when the Legislature cannot be convened) against domestic Violence.

In closing of this section, I must stress that the states have every right as sovereign nations to leave the Union if the Federal Government was usurping its enumerated powers. William Rawle, an eminent and universally respected Philadelphia lawyer, authored “A View of the Constitution,” a textbook studied at the United States West Point Military Academy.(3) Rawle observes on page 296:

The principle of representation, although certainly the wisest and best, is not essential to the being of a republic, but to continue a member of the Union, it must be preserved, and therefore the guarantee must be so construed. It depends on the state itself to retain or abolish the principle representation , because it depends on itself whether it will continue a member of the Union. To deny this right would be inconsistent  with the principle on which all our political systems are founded, which is, that the people have in all cases, a right to determine how they will be governed.

Rawle continues on the following page:

It was observed, that it was competent for a state to make a compact with its citizens, that the reciprocal obligations of protection and allegiance might cease on certain events; and it was further observed, that allegiance would necessarily cease on the dissolution of the society to which it was due. The states, then, may wholly withdraw from the Union.

CONCLUSIVE FACS: The several States are all sovereign and independent republics and the United States is a Union (federal republic); the states have the authority to secede the Union they helped create, and that is when the Federal Government went from government of consent to a government of coercion.

The United States of America was never meant to be a democracy, but as you will find out in part two, the Federal Government waged a war of subjugation on all the states, not just the south, under the guise of “preserving the Union” as Lincoln proclaimed.

(1) – “Private international law assumes a more important aspect in the United States than elsewhere, for the reason that the several states, although united under the same sovereign authority and governed by the same laws for all national purposes embraced by the Federal Constitution, are otherwise, at least so far as private international law is concerned, in the same relation as foreign countries. The great majority of questions of private international law are therefore subject to the same rules when they arise between two states of the Union as when they arise between two foreign countries, and in the ensuing pages the words “state,” “nation,” and “country” are used synonymously and interchangeably, there being no intention to distinguish between the several states of the Union and foreign countries by the use of varying terminology.” 16 Am Jur 2d, Conflict of Laws, Sec. 2

(2) – The 14th Amendment to the Federal Constitution nationalized (federal) citizenship in the United States. No such citizenship yet exists in Europe between the members of the EU.

(3) – “General Lee told Bishop Wilmer, of Louisiana, that if it had not been for the instruction received from Rawle ‘s text-book at West Point he would not have left the United States Army and joined the Confederate Army at the breaking out of the War between the States.” “Truths of History” by Mildred Lewis Rutherford (1920)